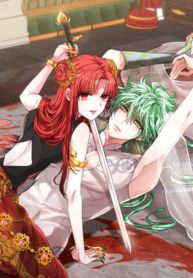 When the emperor murders the python, god of the waters, a curse is put over the Cha Kingdom preventing men from succeeding the throne. So begins the reign of empresses and the endless struggle against men who try to control the kingdom. After all her sisters are killed by the hands of Yom, the young Empress is seated on the throne. Rather than performing her duties as a ruler of a kingdom, the empress spends her days and nights drinking and sleeping with different men, whom she all executes immediately after. The people call her the Blood Empress, attributed to her violent behavior and the red hair, which is dyed with the blood of the men she killed. One day, the Empress meets a handsome and intellectual young man named Kanghee. As she picks up her sword to kill him, Kanghee convinces her to spare him and begins to captivate her heart by telling her stories he’s read from book. As the empress gets closer and closer to Kanghee, she begins to change her violent ways. Is he someone she can finally put her trust in? Or is he not?